How to Get More Than “Fifteen Minutes of Fame”

In the future, everyone will be world-famous for 15 minutes.

Whether Andy Warhol really uttered those words is uncertain, but the notion of experiencing a fleeting, celebratory 15 minutes of fame has been flying around since the artist’s celebrity rocket took off in the 1970s.

The idea behind the catchphrase is that sooner or later everyone will have their moment in the spotlight, but that it will be short-lived. That could be fortunate if your 15 minutes of fame is a result of unseemly behavior or an embarrassing incident; it will be yesterday’s news before long. But it’s not so good if your company or organization is aiming for positive, sustained media exposure over the long term.

One Red Chalk Studios client that has been adept at staying in the public eye for ten years running is the team behind askHRgreen.org. An initiative of the Hampton Roads Planning District Commission, this region-wide public awareness and education campaign launched in 2011 with the goal of encouraging residents to make good environmental choices.

Red Chalk Studios has been with the “ask” team every step of the way—from creating the name, logo and website, to developing memorable marketing promotions, soliciting news coverage, kicking off targeted broadcast and digital advertising campaigns and all manner of cool, clever promotions.

Today the program is led ably by Katie Cullipher and Rebekah Eastep who oversee the program’s many arms and legs—not to mention people. AskHRgreen.org is powered by nearly 100 employees from 17 cities and counties in Hampton Roads, plus the Hampton Roads Sanitation District.

The work is spread across four committees, whose members are responsible for promoting recycling and beautification programs; stormwater pollution prevention; water awareness; and ways to keep fats, oils and grease (FOG) and other messy no-no’s from clogging your pipes.

Sound a little grimy? Believe us, Katie and Rebekah really know how to rock these topics.

Over the years, Red Chalk has been privy to the secrets of the campaign’s success, and today we are revealing Five Ways to Keep Your Brand in the Spotlight, the askHRgreen.org way.

1. Know your audience; tell them what to do.

From the get-go, the askHRgreen.org campaign was founded on solid facts, research and focus group studies.

While a number of Hampton Roads residents thought they understood how to be good green stewards, the research revealed otherwise. They needed a one-stop shop for finding answers to lots of questions.

As a result, the askHRgreen.org program was born. Over the years, as the campaign has evolved and grown, its managers have kept their sights on this simple idea—that people want to do the right thing, you just have to tell them how to do it in simple, easy-to-understand language.

2. Be willing to try new things. 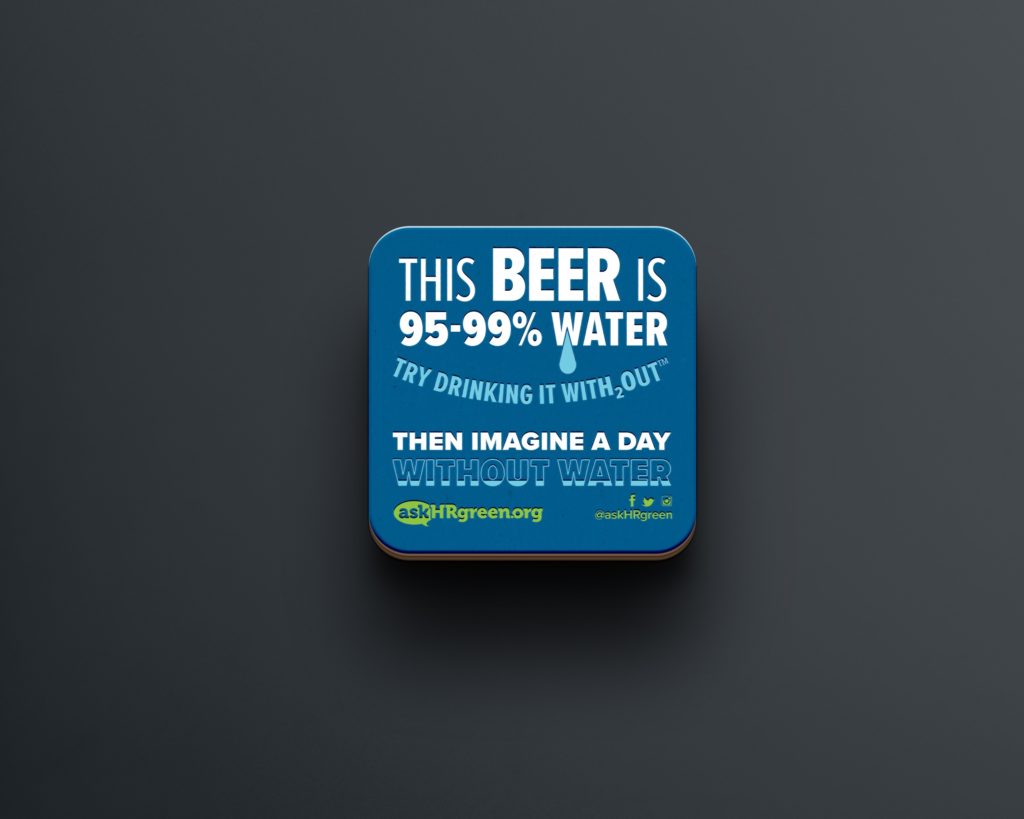 The askHRgreen.org messaging doesn’t change dramatically from year to year, but the way it is packaged and delivered does.

Here’s an example: The committee that oversees water awareness wanted residents to understand the importance of the region’s water and wastewater systems that bring a steady flow to and from homes and businesses.

Good old H₂O makes up 95 to 99 percent of every cup of coffee and bottle of beer that’s served, so the committee decided to pour their messaging into community coffee shops and breweries. They rolled out their “Imagine a Day without Water” campaign with the assistance of 20 local businesses.

Baristas and brewmeisters handed out special-edition coffee sleeves and coasters, asking customers to envision drinking these beverages “WITH2OUT.” The promotion, held over two weeks, created a bit of buzz on local print, television and online media, while earning kudos from the participating businesses.

The committee is planning a redux of the promotion. The takeaway here: It pays to try new things. 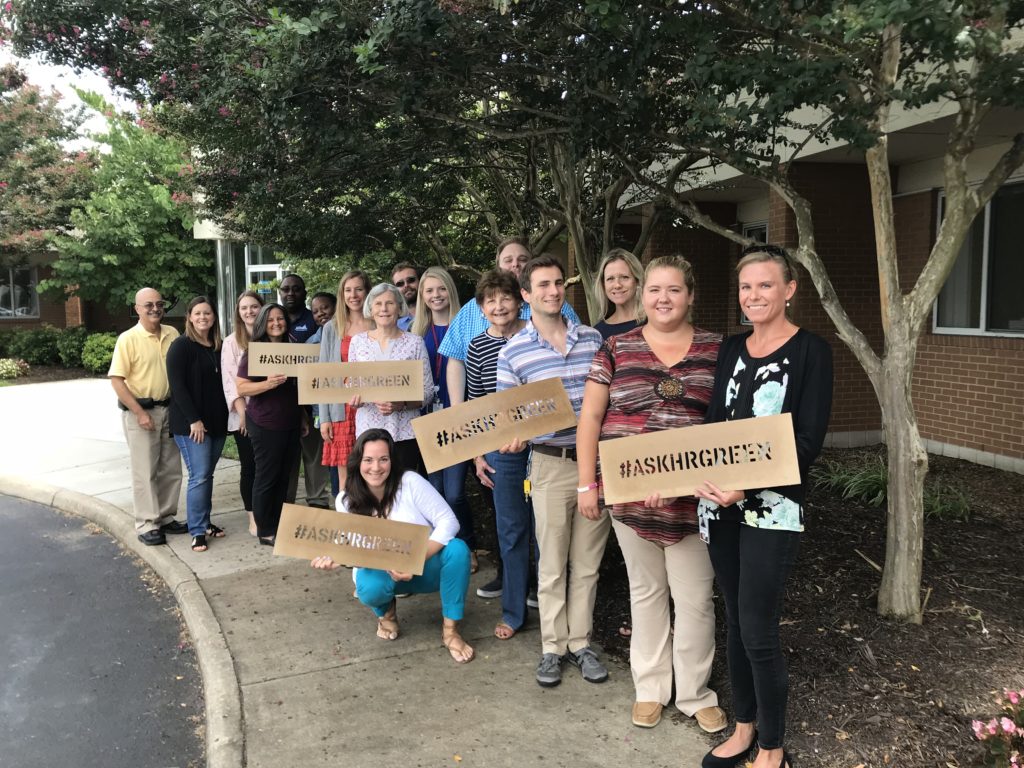 Two heads—or in the case of the combined “ask” committee members, dozens of heads—are better than one. While each group has its own agenda, they also come together on occasion to present a uniform front.

For several years, the four committees joined forces to spread their individual good-to-do messages by stenciling them on the region’s public sidewalks. The catch? The messages only appear when it rains. The most recent “Write as Rain” campaign missives appeared at the entrances of schools, libraries and recreation centers across the region.

A true hands-on project, committee members took to their own localities to apply the stencils, which touted sayings such as, “I pledge only rain down the drain,” and “I won’t add wipes to our pipes,” among others.

Coupled with targeted marketing, a social media contest and media relations outreach, this promotion was “write” in so many ways.

4. Team up with your tribe. 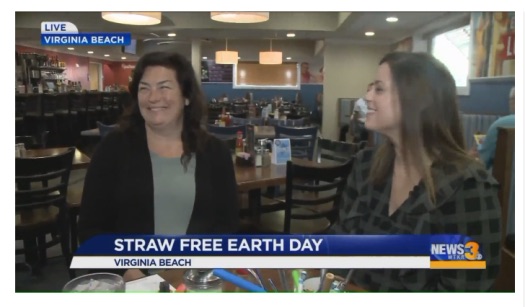 In advance of this year’s Earth Day, askHRgreen.org paired up with a like-minded organization, Keep it Beachy Clean. Their joint “Straw-free Earth Day” event was a chance to raise awareness about the environmental effects of single-use plastic straws, ranked among the Top 10 most littered items by The Ocean Conservancy.

Targeting the region’s restaurant community, the partnering organizers invited eateries to fill out an online form, where they could request window clings, tabletop signs and social media graphics with messages such as: “Thanks for skipping the straw. You just kept a seahorse from looking trashy.” For diners who simply couldn’t go without, they also provided paper straws.

The campaign was a hit with the restaurants, diners and the media. One local television station covered the story beginning at dawn, with hourly live feeds from a participating restaurant, while community newspapers devoted space to the story. 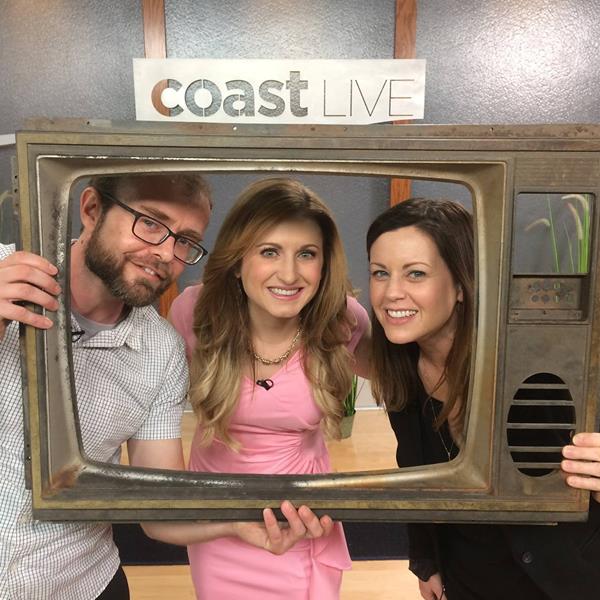 Katie and Rebekah do a fantastic job as the askHRgreen.org spokespeople. But given the campaign’s wide reach, the role of publicity is more than a two-woman job.

Early on, campaign leaders established a Media Ambassadors program, using the talent and skills of committee members who are experienced in media relations. The ambassadors undergo training to serve as askHRgreen.org spokespeople, and they join Katie and Rebekah in getting the word out through television, radio and print interviews.

Their work enables askHRgreen.org to fulfill more interview opportunities. But perhaps more important, the ambassadors bring a fresh perspective to topics that are dear to their hearts.

It’s fun to think about how Andy Warhol, who began his career as a successful magazine and ad illustrator, would leverage his fame in today’s non-stop digital age. He certainly knew a thing or two about turning the spotlight on himself. We hope these tips will inspire you to channel your own celebrity, turning 15 minutes into long-lived exposure.

Red Chalk Studios has been helping clients understand, develop and grow their brands for over 16 years. Interested in building a strong and successful brand? Let’s talk!

Our fearless leader. Our woman at the top. Kim is

This week in Chalktown. Wasn’t it fun finding ou

Who else took a fun break and got their pumpkin ca

What’s for lunch? This, this right here. Thanks,

This week's Chalktown illustration... Is it fact o

In our community, Ellen is known by many monikers.

Looking for a way to tell your brand story, connec

It's safe to say we had fun developing these custo

Another custom illustration for our fave peanut pu

Alex holds the honor of being the second-oldest, i